There are few things in life that my 12 year old gets excited about….but with that being said, there are so many things that he has been in love with when it comes to LootCrate.  It’s kind of like Christmas each month when he opens his packages up.  For me the fun of LootCrate can not be compared because who doesn’t want to see their hard to please pre-teen excited about something?!?

So, since I have been ill and had so much happen at the end of last year unexpected….I am back to blogging with a vengeance and want to get all caught up with the amazing companies that I review.

I had not previously paid any attention to the Fallout series of games….I know, not a gamer personally, but with a gamer husband and son this was kind of fun to learn about.  Fallout is one of the most popular games at this time.  This means that this exciting LootCrate had all of the goods that my son wanted.

Each month when you receive your LootCrate, you get a pin that features the month’s theme.

Of course, what teenage or preteen gamer is not going to enjoy a LootCrate that is filled with favorites from all of his combat games.

One of the first things that I noticed with this LootCrate was that it had a fun Vault Boy bobblehead from the popular game, Fallout.  This little guy has been a permanent fixture on my son’s bookshelf since he received it. 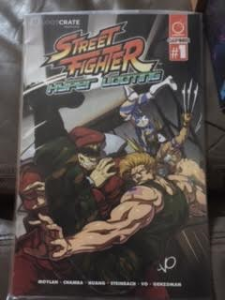 One of the things that my son is currently obsessed with is comic books. He even wanted to go to Comic Con last year for his birthday. So the fact that sometimes you get special edition comic books in your LootCrate is one of the reasons that he first asked for the subscription. I was pretty excited for him that our first month’s LootCrate had a special edition Street Fighter comic book included.

Speaking of comic books, each month LootCrate features a book that is reminiscent of a fun comic book. The book leads you through all of the information about the subscription that month and introduces you to the items that are included in your shipment. 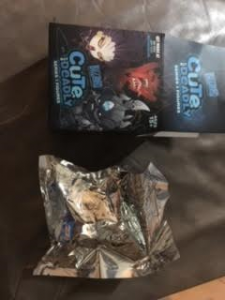 The next thing in the LootCrate box is something that I absolutely fell in love with. It was a Cute But Deadly figure and it is so cute! I know that this is not what my son would use to describe this figure but I can’t help it! These characters are fun and I love that the small action figure was featured.

Another Cute But Deadly feature in the November box was these awesome special edition magnets. My son instantly exclaimed with how cool they were and that he could use them anywhere, even inside of his locker at school.

Then there were these awesome pair of Shredder Shades. While my son is not in love with everything in his crates each month, there are many months where he is. These were a miss for him, but thankfully he has a six year old little brother who thought that these were the best things since sliced bread!

Now, even though I am not a gamer that does not mean that I am not a bit of a nerd as well. In fact, I love reading and I read books from all genres. I enjoy many different types of sci-fi and a recent favorite of mine in the past few years has been the Hunger Game series. While it was not love with the movies, the books were definitely something that I fell in love with! This pin is pretty cool and I liked that it was not too big where no one would ever wear it, but also that it was not too small where no one would ever notice it. It is a nice sized pin and one that I think both my son and I were excited to see in the box.

A Few Favorites About LootCrate

LootCrate is a favorite in our house of the monthly subscription boxes. We have been subscribers to a few recently, either for review or on our own and this is certainly one that ranks in as a top rated choice. If you are unsure if this is something that you would love, then you can sign up for the first time with a one month plan for just $13.95/mo. If you sign up for 3 months, it is just $13.25 per month. With a six month subscription you save even more and it will only cost you $12.95 per month. Then if you decide to go with the one year subscription, it is just $11.95 per month and you even get a free t-shirt!

Now here is here I am going to really brag about LootCrate for a minute.  One of the things that I like the most about this subscription is that it features a little bit of something for everyone.  Plus, it has a mixture of fun items, unique things that you won’t find anywhere else, and practical items.