I am excited….no wait, I am EXCITED (yeah that’s right, shout-it-from-the-rooftops excited) to be able to catch the Chris Robinson Brotherhood at the upcoming Phases of the Moon Festival. First off the band plays amazing music that has insightful lyrics that I personally love to listen to. Not only do they write their own music that is amazing but they also cover some of my all time favorite songs.

If you were to ask me what I hope for during the festival I would say that I’d love to hear Wanderer’s Lament and a Sugaree cover. That’s right, sing me some Sugaree, Mr Robinson.

Now I have to admit that I have always thought that Chris Robinson was pretty fabulous and was even a fan of his back in his Black Crowes days. I have always had a little soft spot for him as a fan because of his soulful voice that seems to really be able to soothe me during bad times. I know personally that I choose to listen to the Black Crowes and Chris Robinson Brotherhood when I am under a lot of stress. Something about this man’s voice can seriously calm me during the toughest of times. 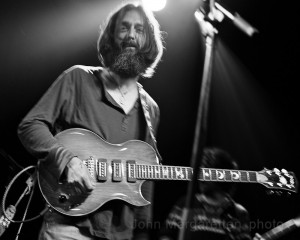 Take for instance today, I was trying to put my two and a half year old daughter down for a nap. She was of course trying to fight this process as she feels she must do each every day. She just screams and screams. Well, today I was sitting there and instead of putting on headphones and laying next to her I really needed to get some work done. So I chose to play some Chris Robinson Brotherhood on my laptop. Thankfully this is what finally lulled my little angel to sleep today. Thank you from the bottom of my heart for this because some days the struggle is purely exhausting and today the soulful voice of Chris Robinson worked on my little angel in much of the same way that it works on her mama. She was finally calm enough to drift off into slumber.

I love thinking about where I was when I first heard a band or what their songs mean to me. This is something that helps me know that I am connected to the art of music. When it comes to the Chris Robinson Brotherhood I think that I first heard their music online when I learned about the new band that Chris Robinson was a part of. I was so shocked at the beauty of the music that they have played and the number of amazing years that Chris Robinson has been the front man of a great band as he continues to put out some of the most heartfelt music around. One of the things that I love so much about music is the passion that you can feel when you are in the presence of greatness on a stage.

I honestly believe that I will be able to feel this passion and be able to see the love of music when I hear the Chris Robinson Brotherhood playing at the Phases of the Moon Festival. I guess you all know that I am going to be there, but will you? If you are going to be there please hit me up and let me know what you think.