One of the things that brought my husband and I together was our joint love for music, concerts, and music festivals. We both loved these events when we were single and before we were together. So it is only natural that we should love them since we have been together.
They say that having children changes everything. While this is true and our summer time adventures are quite different now that we have a family, it is not true that you have to give up the things that you love most when you have children. 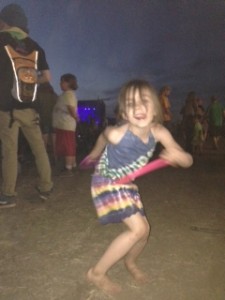 Taking a child to a festival can be a challenge. However for over ten years I have been taking children along with me when I go places so I have gotten it down and now I feel like a pro. Packing them up and taking them along to any type of event can be a lot of fun and can be 100% family friendly.

On Sunday we went to Summer Camp Music Festival in Chillicothe IL. We have been in attendance at this festival for a few years together and our kids have been before. Last year we did go to the festival as our honeymoon so we were kid-less.
However, we have learned that you can have just as much fun seeing a concert or going to a festival with children as you can without them. The key to having a good time is to remember to go at their pace and to be prepared for anything, even if this means packing an extra bag or two. 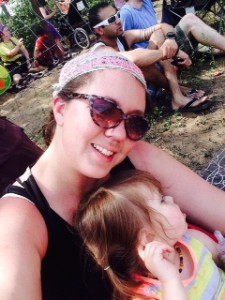 I thought that I would share a few pointers from when we were at the festival this weekend so that you could possibly enjoy these types of events with your family too.

Find Out Where the Other Kids Are 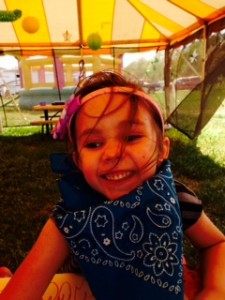 One of the things that I love most about Summer Camp Music Festival is that they have an awesome Kids Camp. Not only is Kids Camp full of fun but it is also full of amazing staff that have been running the Kids Camp for many years now. The original Kids Camp was started out of the back of one volunteer’s van with a few totes of arts and crafts supplies.

This year the Kids Camp featured water fun with squirt guns and water balloons. This was Huxley’s favorite part of the Kids Camp and he really enjoyed spraying me with the water guns. Thanks to the heat it actually felt good to get sprayed by the cool water. Kids Camp also had a bounce house with a staff person who watched the kids the entire time to make sure that they were safe. Plus there were all of the arts and crafts that we have come to love year in and year out.
Take Advantage of Family or Friends 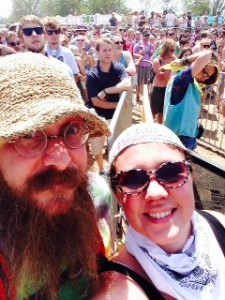 We are lucky when we go to Summer Camp because grandma and grandpa are there with their camper. They really love the kids coming and seeing them so they were nice enough to take them for a little bit so the hubby and I could catch a show together by ourselves. We caught Umphrey’s McGee and had a great time dancing and enjoying some fun. We also grabbed a bite to eat when we were alone and I would highly recommend checking out Peace, Love, and Tacos if you see them at a festival where you are at.
Look for Friends 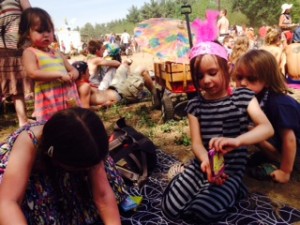 After we went to Umphrey’s we picked up the kids and went to see Yonder Mountain String Band. While we were enjoying the show, we met a lovely family that had two little girls that wanted to play. It was nice for the kids to meet some new friends and to really get to enjoy some time playing together. 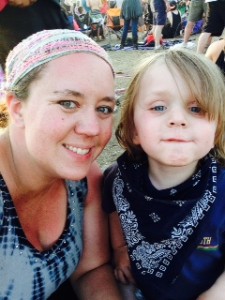 Since my kids really love Yonder Mountain it was a great time for them all the way around. They enjoyed dancing, singing along when they knew the songs, and just playing while we got to see a really nice show. Not to say that Jeff Austin wasn’t missed, but I was surprised to see how the band played without him. I have always been a fan of his and really did not think that they would be the same without him but it appears that the music will play on and they will fare well on their own.
Dance With Your Children
Our little ones love dancing. We danced with them at Yonder Mountain String Band. 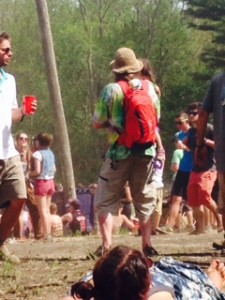 Adeline was getting tired during the Zac Brown Band set that we saw so I threw her on my back in my favorite carrier for festivals (my tie dyed MOM Tai) and got my groove on while she had a great time on my back.

After the Zac Brown Band the kids loved dancing at the Trey Anastasio Band sets because they knew the music so well. I tend to listen to a lot of TAB while I am in the car so the kids are pretty familiar with the songs which meant that it was more fun for them. During TAB while the younger two slept Althea even decided that she wanted to be in the carrier and dance on mom’s back for a while.
Bring Glow Sticks or Glow Toys

Glow sticks and glow toys can become so much more while you are playing with your kids during a show. My kids love being creative with their glow sticks and really have a good time with them. While we were enjoying an amazing TAB set I got to have some amazing memories with our children. I really loved singing along to “Cayman Review” with Adeline and the jams were so much fun for the kids to jump and dance to. 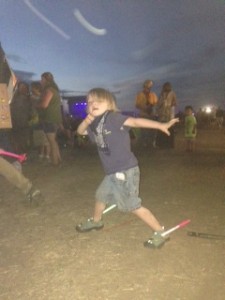 At one point during the night Huxley even used his glow sticks to create “rocket ship shoes” and Althea got to practice her amazing talents at some yoga.

All in all Summer Camp Music Festival 2014 with the kids was a hit for the day. We had thought about going all weekend and since it was so dusty and Huxley has such severe allergies I am kind of glad that we just went for the day. I was a little disappointed that I had to miss seeing Les Claypool with Primus though.